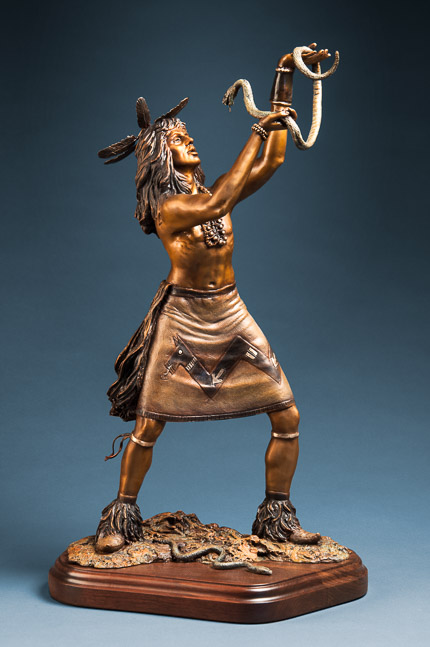 Central to Hopi life is the belief that all things in nature have specific roles to play in maintaining this world’s equilibrium.  The Hopis’ role requires them to keep good hearts and observe complex rituals.  Failure in these duties upsets nature’s delicate balance and causes calamity.

Of the many rites the Hopis observe, the ‘Snake Ceremonial’ is one of the most spectacular…  …The rite is held in late August and is meant to bring rain that guarantees a good harvest.  The snake, with is zigzag movements, symbolizes lightning and its accompanying rain.

The entire ceremony, conducted by the Snake and Antelope religious societies, last for nine days.  For the first few the men prepare themselves – praying, fashioning prayer sticks, and setting up altars within their kivas.  Then each morning for four days members of the societies go into the desert to capture snakes, both poisonous and non-poisonous, which are placed on the kiva.  On the eighth day there is a symbolic marriage between a girl representing a Snake virgin and a youth representing a Snake Hero.

Also on the eighth day the men of the Antelope Society perform; dancing around the plaza while holding the earliest fruits of the harvest – melons, squash, and bean vines.  The stamping of their feet is to draw the attention of the gods.

On the ninth day the — the most dramatic of the colorful Snake Ceremonial — the reptiles are brought from the kiva where they have been washed in water and dried in sand.  The snakes are credited with the ability to tell if a man has a truly pure and fearless heart and after their ceremonial baths the creatures drape themselves over the bodies of the most worthy men to sleep.  This climactic day ends at sunset when the Snake men dance as the Antelope men chant.  While dancing the Snake men pluck the snakes from the Kisi, a bower that has been built for them, and carrying the reptiles in their mouths, they circle the village plaza.

Finally the snakes are taken back to the desert and released to spread the word of the Hopis’ prayers and intercede with the spirits to bring the much needed rain.